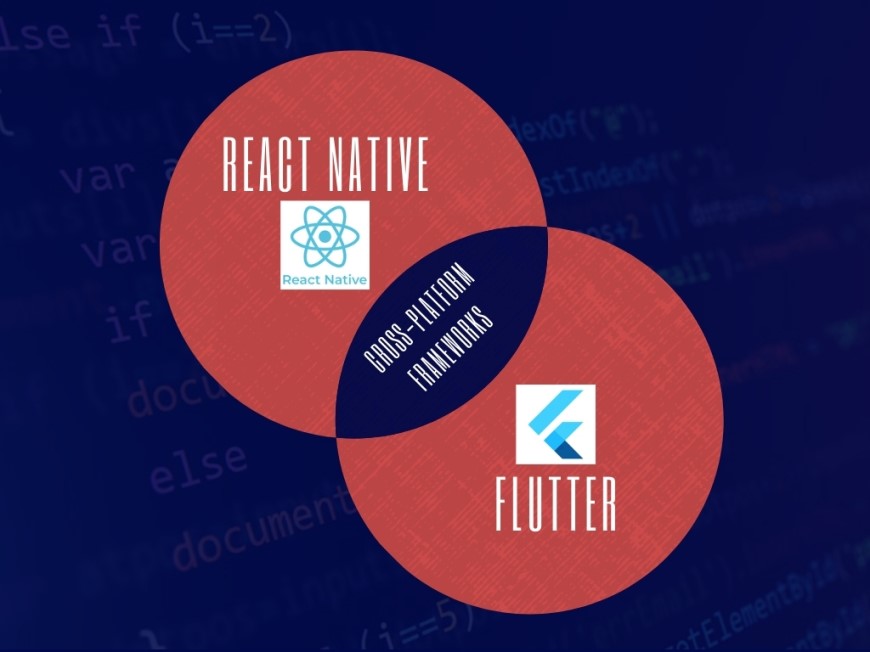 What are Flutter & React Native?

Flutter and React Native are open-source mobile UI framework that helps developers to build cross-platform apps from a single codebase. React Native was released by Facebook in 2015. Since then, React Native has gained a significant reputation with a big supporting community. Flutter has been promoted by Google since 2017 and has seen a rising adoption rate since then. In our new blog post, BHSoft will compare these two most popular cross-platform mobile development frameworks.

React Native uses JavaScript – the universal language with huge support from the developer community. Meanwhile, Flutter uses a language called Dart. Although Dart is easy to learn, it cannot beat the popularity of JavaScript. It is also easier to find JavaScript developers in the market.

This still remains controversial as some say Flutter is better in performance while others say Flutter can’t beat React Native.

According to many developer communities, Flutter is a better choice if the task requires lots of CPU and memory. Despite being a mature technology, React Native has inherent performance issues due to JS/native bridge as even explained in details in React Native documentation. For detailed comparison, you should check this article. At BHSoft, we love Flutter because we already have a strong team of Android and Java developers and it’s convenient for us to transfer our Android developers to Flutter developers. Plus, Dart shares plenty of similarities with Java in syntax.

Facebook released React Native in 2015 and has daily invested in it since then. React Native is supported by many big names such as Microsoft, Callstack, Expo, Infinite Red and Software Mansion. Plenty of Facebook products are coded in React Native. With heavy involvement in React Native, Facebook has successfully promoted React Native with gaining popularity through the time. Flutter is backed by Google – another big player in the industry. Google also aims at turning Flutter into the top cross-platform app building solution and clearly it is working. According to Google Trend, Flutter has become the second most leading language for developing cross-platform mobile apps, followed by React Native in 2020.

Both React Native and Flutter allow developers to use the written code on multiple platforms. However, not 100% of the code can be reused. With Flutter, developers could easily overwrite and edit sections of code to suit different platforms. Meanwhile, React Native allows code reuse only in limitation. Only certain components can be reused, the rest has to be specifically written for each platform.

Flutter uses widgets which are similar to components and very easy to catch up for those who have already been familiar with React or Angular components. Flutter has a much more significant number of widgets (156) than React Native’s components (40). However, quantity doesn’t really matter as React Native has proven itself to be super dynamic over thousands of successful applications and trusted by the developer community.

As much as Google tries to promote Flutter, it is undeniable that React Native has stood the ground for much longer. Therefore, React Native has a much larger supporting community, more detailed documentation and of course, higher stability and maturity.

Flutter also did a pretty good job in delivering to users a complete and sufficient documentation, using modern architecture such as Business Logic Component or BLoc, Redux/ Flux and RxMarbles. Flutter knows to take the best from other frameworks to form its own unique and modern framework.

At BHSoft, we have strong dev teams of both React Native developers and Flutter developers. Our teams mostly aim at creating mobile products for customers. Whether it is JavaScript, Java, Dart or Android-Kotlin, our teams can handle them all. Contact us via email hello@bachasoftware.com for more information.

Bac Ha Software is a dedicated, high-quality software development company in Hanoi, Vietnam. For 7 years they are working on building web and mobile apps, as well as specialised GIS, 3D and BIM software.

© 2022 Your Software Supplier. All Rights Reserved.